John Camp has given another virtual seminar from the Athenian agora. The subject this time was the temple of Hephaistos that stands on the low hill overlooking the agora. He broke the temple down into its architectural elements from its foundations to the roof. His explanation of the proportions of the Doric order showed how a reconstruction can be made from the smallest of architectural fragments. Camp explained how the internal structure of the temple had been reorientated when the building had been converted into a Christian church. There was a reminder that the modern planting was informed by the excavated ‘plant pots’ around the temple.

The subsequent questions include a discussion of the date as well as the use pf polychromy.

These in situ seminars do so much to explain architectural remains.

I will be exploring the relationship between Winifred Lamb’s work as an archaeologist in the Aegean, and her role as Honorary Keeper of Greek Antiquities at the Fitzwilliam Museum, Cambridge. In the museum there are recognisable strands to her curatorial work: the display (and publication) of the Greek figure-decorated pottery, supplemented by the Ricketts and Shannon loan (and later Shannon bequest); the formation of a prehistoric gallery; the development of a collection of Greek, Etruscan and Roman bronzes; and finally material from Anatolia. The Greek pottery interest was influenced by her work with (Sir) John Beazley in Room 40 during the final stages of World War 1.

In a second paper I will consider the process of writing Lamb’s biography: the archive sources including her correspondence, diaries, and photographs; her acquisitions for and gifts to the Fitzwilliam; and her publications. I will then turn to the writing of a life from an essay in Breaking Ground to the memoir in ODNB. What should be included or excluded? Where do the emphases lie?

Heritage Futures will be discussing the RSA Heritage Network questions in the context of ‘Suffolk Diverse Heritage‘. Heritage in Suffolk is supported by two key bodies: the Suffolk Strategic Heritage Forum, and the Ipswich Heritage Forum. We will be considering the challenges facing heritage in Suffolk, and what we can do to support, conserve, develop and interpret heritage more widely across the county.

There will be two short presentations: one on The Hold, the new heritage centre for Suffolk (funded by HLF), and the other on museums in Suffolk. 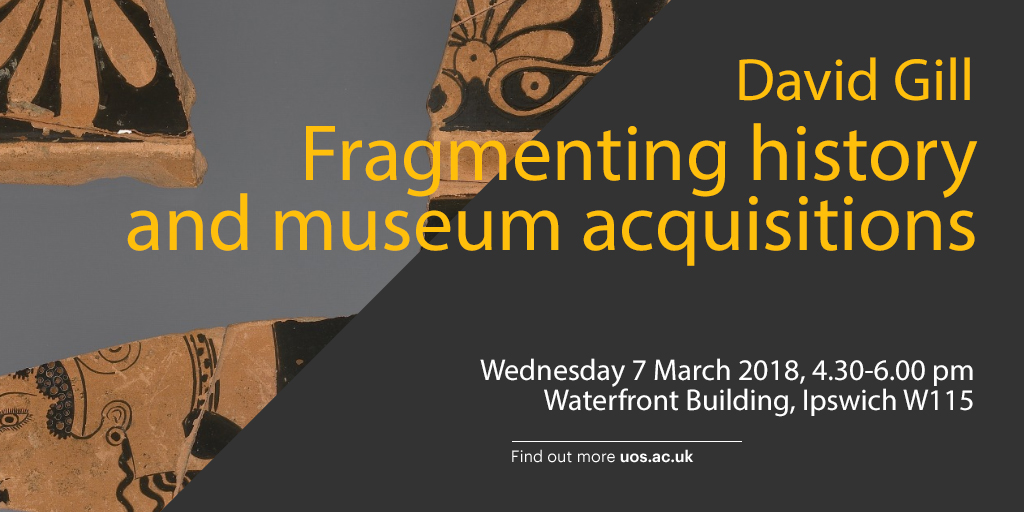 The seminar will look at how some major museums have acquired Athenian figure-decorated pots fragment by fragment. How were the fragments dispersed? When was the pot fragmented? The research will look for patterns in the acquisitions, such as sequences of gifts and sales. The situation is made more complicated as some of the pots have been returned to Italy as part of a wider investigation into the illicit trade in antiquities. How can museums adopt a more rigorous due diligence process prior to acquisition?

The Abbey of St Edmund Heritage Partnership is seeking to record and interpret the remains of the Benedictine abbey in Bury St Edmunds, Suffolk. Richard Summers will be talking about the work of the partnership on Wednesday 21 February 2018 at 4.30 pm in the Waterfront Building of the University of Suffolk. The event forms part of the Heritage Futures research seminar series.

Places can be reserved via Eventbrite. All are welcome and there is no charge.

Further details about the project can be found here.

Readers of ‘Heritage Futures’ will know that we have more than a passing interest in the historic signs erected by the Ministry of Works (and its successors) to interpret and manage sites in state guardianship. This seminar will explore the range of signs used across prehistoric, Roman, medieval and industrial sites in the UK. These include the signs directing visitors to the site, car-parking, warning signs and directional arrows, as well as those that help to interpret the different parts of complex buildings such as abbeys and castles. Many were cast by the Royal Label Factory.

Greece has faced serious economic and social challenges during the present economic crisis. Heritage sites are seen as a major asset in the tourism strategy for Greece to generate income from outside the country. There are 15 World Heritage sites in Attica (the Athenian Akropolis), central Greece (Delphi), the Peloponnese (Bassae, Epidauros, Mycenae and Tiryns, Mystras, Olympia), Macedonia (Vergina, Thessalonika), and the islands (Delos, Rhodes, Chios, Corfu, Samos, Patmos). The paper will analyse data from the Hellenic Statistical Service.

In 2014 more than 14 million visits were made to heritage sites and museums in Greece. Back in 2008 the same figures showed that only 8 million visits were made. There are clearly heritage ‘hot-spots’ with Athens, Knossos, Rhodes and Olympia leading the way. The figures suggest that visitors tend to enjoy visiting sites rather than museums, though at Delphi nearly two-thirds of visitors also make their way to the museum to see the finds from the excavations. In 2014 heritage sites and museums generated more than 54 million Euros in ticket sales alone.

However there are some sites and museums, especially on more remote islands or in the mountains of the Peloponnese, where visitor numbers are extremely low. There are suggestions from northern European and North American arts commentators that Greece should realise its assets by selling ‘duplicate’ objects from its extensive holdings. 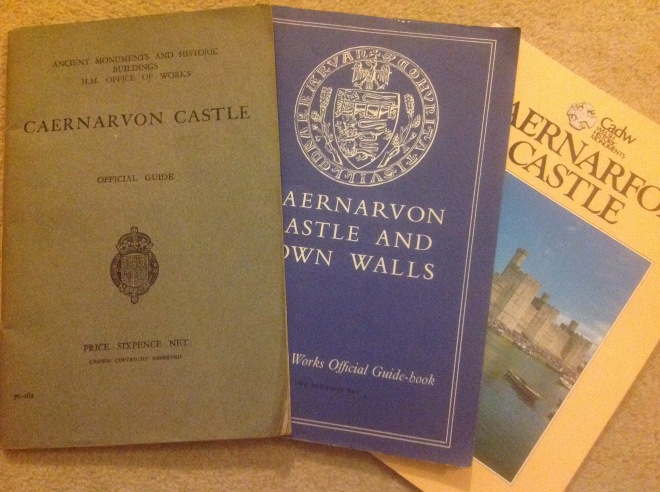 The UCS Heritage seminars resume on Wednesday 7 October. The first will be given by Professor David Gill on ‘Inspectors, ancient monuments and heritage guidebooks’. This will look at the evolution of guidebooks for ancient monuments and historic buildings placed in state guardianship. These guides emerged in 1917 (see St Botolph’s Priory) and evolved into the familiar ‘blue’ guides of the Ministry of Works and Department of the Environment. The formation of Cadw, English Heritage, and Historic Scotland produced a new set of distinctive guidebooks although the texts of some can be traced back to the 1950s. The seminar will explore some of the personalities behind the creation of the guides, notably Sir Charles Peers, C.A. Ralegh Radford, and Arnold J. Taylor.

Abstract can be found here.

The May edition of the East Anglican (the diocesan magazine for St Edmundsbury and Ipswich) has a feature by Marion Welham on church tourism and the Angels and Pinnacles initiative. It notes the launch of the ‘Bells and Battlements’ launched at the Suffolk Unlocked event at Trinity Park, Suffolk (2015). There is a mention of the Heritage Futures seminar led by Marion earlier in the year.

Staff members from Heritage Futures are involved in a number of projects and research activities. A summary of some of the activities for the Period covering September to (early) December 2014 is now available.