The long stone on the down above Mottistone originally formed part of the entrance to a Neolithic long barrow [National Trust].  The mound was excavated by Jacquetta Hawkes in 1956 (and published in Antiquity).

The NW Highlands Geopark is one of the those special places with dramatic landscapes: mountains, lochs, bogs, coastline. There is a crowdfunding exercise to support the park.

Some 450 delegates attended a conference at the Apex in Bury St Edmunds to hear about the results of the survey and excavations (2008-14) at the vicus regius of Rendlesham in Suffolk. One of the themes explored was the relationship between this apparent elite site on the Deben with the ship-burial site at Sutton Hoo. A further discussion was on the place of the former Saxon Shore fort at Walton Castle (near Felixstowe).

Martin Carver chaired the final session and emphasised the international significance of the discoveries. Christopher Scull outlined plans for publication (including an article in Antiquity) and future grant applications.

The conference was organised by Suffolk County Council with support from the Sutton Hoo Society, Council for British Archaeology East, and University of Suffolk.

Ri Cruin Cairn is one of the Early Bronze Age burials in Kilmartin Glen. Although damaged by the construction of a lime kiln, it was the subject of a series of excavations, including one by V. Gordon Childe in 1936. The site is in state guardianship and now is in the care of Historic Scotland.

The photograph, dated to July 1985, shows the Ministry sign located on the edge of the cairn. (This is a scan of the print.) The sign has since been removed. 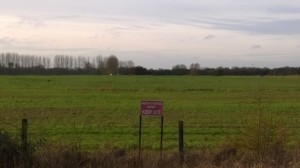 I took a walk yesterday around the eastern perimeter of the former RAF station at Oakington, along the new(ish) guided busway which links St Ives with Cambridge.  This is itself built on the trackbed of a former railway line, features of which can still be seen in villages along the route.  This is a complicated landscape, where aside from the historic and prehistoric remains in surrounding villages and fields, the meeting of past, recent past, present and future are being played out as the area gradually morphs into a newly created town, called Northstowe. 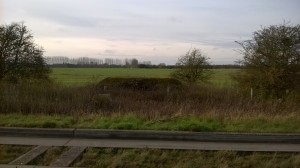 Military sites are by their nature of being off limits interesting – they have their own language of architecture and design, and are usually hidden away from view.  The site at Oakington has been airfield and barracks, and following decommissioning as a military site saw a new lease of life as an immigration reception centre during the 1990s.  It is now about to be transformed again as part of a new settlement designed to ease pressure on housing in and around Cambridge.  The site has come on to the radar (pun intended) of urban explorers (urbex), and fans of derelict and abandoned places, as well as military historians.  It can still be an interesting journey on the road which runs around the outside of the western perimeter of the site, linking Oakington and Longstanton – as the route is not officially designated as an open highway.  Occasionally Police still stop people driving along the road, and on some maps the route still does not appear.

In advance of the new town appearing, the abandoned railway line has metamorphosed into a new type of hybrid transport corridor, dedicated to buses, and having its own unique architectural design language.  Tracks and footpaths in the surrounding fields have been opened up in a programme of recreation access and interpretation – and the example shown is an interesting example which blends past, recent, present and future.  A hybrid heritage sign indeed which has already acquired the patina of age. 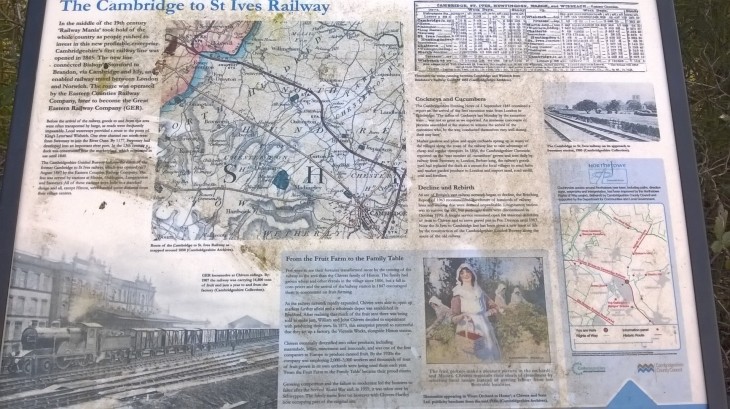 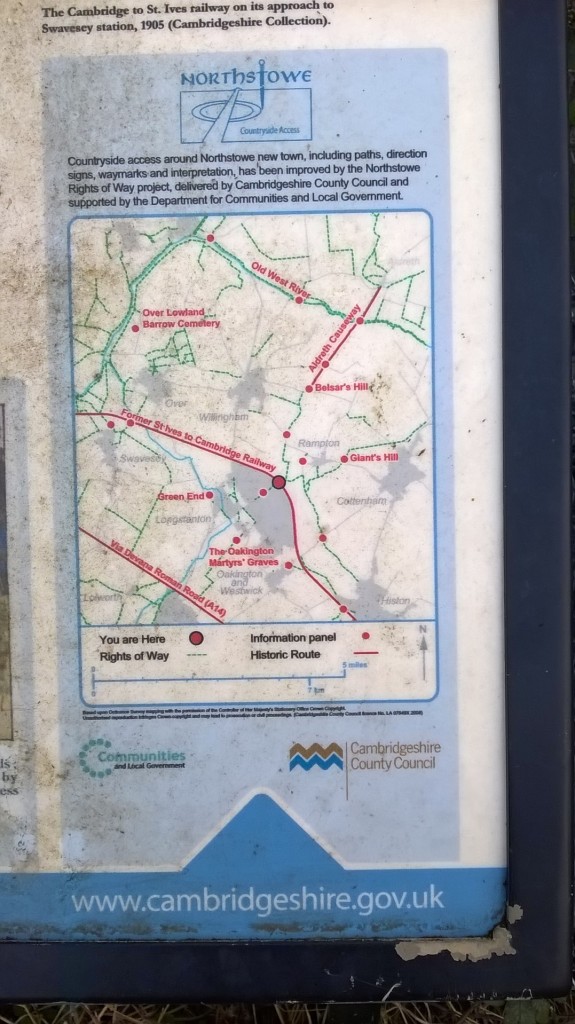 Fronds stand as markers
on this deserted path
hovering above hidden landscapes,
your message obscured.
Distance is cut in stone
but your departure
was measured by oceans. 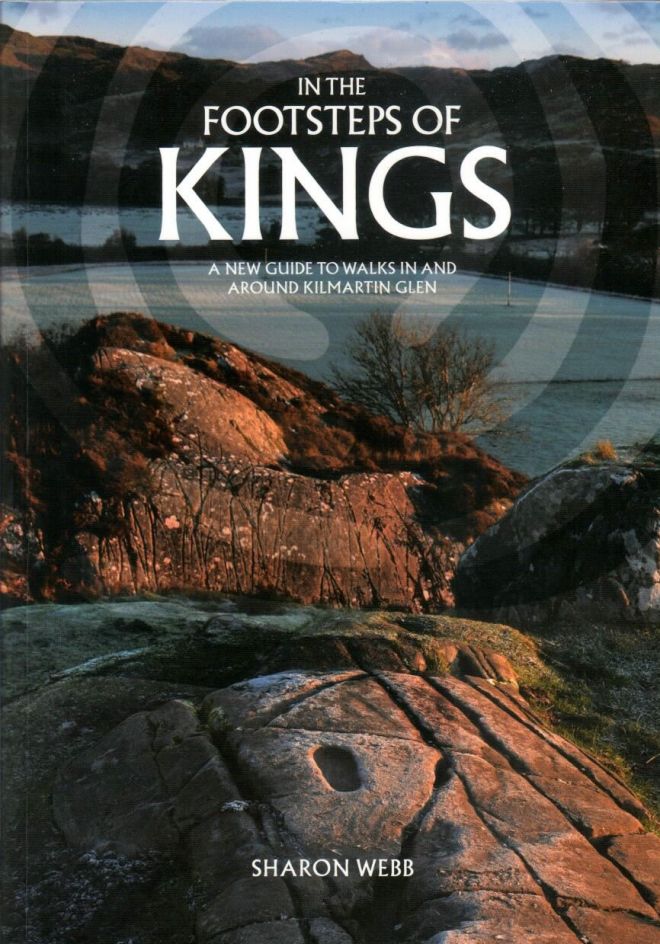 One of the most dramatic prehistoric landscapes in Britain lies in Kilmartin Glen. Sharon Webb’s In the Footsteps of Kings (Kilmartin Museum, red. ed. 2013) provides some 25 walks to explore the glen’s heritage. This includes the burial mounds, standing stones, rock art as well as Carnassarie Castle and the Crinan Canal. And those looking for beavers in nearby Knapdale also have a suggested route. This is a beautifully produced book with clear maps and colour photographs. It is an essential purchase for getting the most out of this part of Scotland.

For other prehistoric landscape walks in Britain see Stonehenge and Avebury.

Kilmartin must be among the top prehistoric landscapes in Britain. Visitors are encouraged to walk between the monuments. This old ministry sign warns visitors when they are about to cross the main road from Oban to Lochgilphead.

Are there other examples of this type of Ministry sign?

The first Ministry of Works guide to the neolithic mines at Grime’s Graves in Norfolk was replaced by an illustrated guide in 1963. (This copy is the 1975 Department of the Environment reprint.) It was written by Roy Rainbird Clarke (1914-63), the Director of the City of Norwich Museums, and son of one of the founders of the Prehistoric Society of East Anglia.

Clarke’s guide has key sections: The Exploration of the Site; The Flint-mining Industry; Mining Technique; The Miners; The Axe Trade; After the Neolithic Period; there is a short description of the site essentially describing Pit 1. There is a fold-out card plan inside the back cover. (Note that the Custodian’s hut was in a slightly different location.)

The guide includes several reconstructions by Alan Sorrell: a ‘section’ through one of the pits showing how flint was quarried (p. 2); ‘How the miners extracted flint’ (pp. 16-17); ‘ritual ceremony among prehistoric flint-miners’ (p. 20); three views of ‘why the flint was mined’ (p. 25). One of them is clearly dated 1963 so presumably they were commissioned for the guide.

The format of the guide makes it contemporary with the illustrated guide to Stonehenge and Avebury, as well as for the Edwardian castles in Wales, and monasteries in Yorkshire.

The latest guide is by Peter Topping. The tour includes ‘Setting and landscape’ with an image of a stone curlew that sometimes nest at the site. There is a useful section on ‘Flint and its formation’. Those interested in the post-neolithic use of the site will find discussion (and reconstruction) of Grimshoe Mound  dating to the late Saxon period, and foxholes made by the Home Guard in World War 2.