Hurst Castle was built to guard the western approach to the Solent. At the centre lies the Tudor artillery fort constructed between 1541 and 1544.

The coastal defences were strengthened during the 1850s, and the west and east wings at Hurst were added in the 1860s and 1870s. It served as a coastal battery in World War II.

Opposite Hurst Castle was Fort Albert (on the right of the picture below).

Portchester Castle consists of a Late Roman Saxon Shore fort, with a Medieval castle and church placed within its walls. It was placed in Statue Guardianship in 1926 and Sir Charles Peers wrote the first official guidebook in 1933.

The new English Heritage guide was prepared by Julian T. Munby (who had excavated on the site with Barry Cunliffe). This contains two tours: The Medieval Castle, and the Outer Bailey and Roman Fort. These are followed by a history of the castle including the Roman fort and the Saxon settlement. The guide has numerous reconstruction drawings and photographs. The centre pages provide an overview of the whole castle.

The current English Heritage guidebook is by John Goodall. It contains a tour followed by a history, with special sections on ‘Building the Roman Fort’ and ‘Prisoners of War’. There are plans of the fort and the different levels of the castle on a foldout plan inside the back cover.

The mosaic from Thruxton in north-west Hampshire was discovered in 1823 and was presented to the British Museum in 1899 [catalogue]. John Lickman’s engraving of the mosaic from the time of the discovery showed that the central roundel contained an image of Bacchus seated on a feline. This was subsequently lost through plough damage.

In the corners of the mosaic were the four seasons. An inscription appears at the top containing a name: Quintus Natalius Natalinus et Bodeni. A further line of text is known from the bottom end of the mosaic although only two letters could be read.

The mosaic appears to come from a villa, and it probably should be dated to the period 250–350.

The Premonstratensian abbey at Titchfield was founded from the foundation at Halesowen in Worcestershire after 1214. It was dissolved in 1537 and Thomas Wriothesley had the buildings adapted into a residence.

The ruins were acquired by the Ministry of Agriculture and Fisheries c. 1914–18, and their responsibility fell to the H.M. Office of Works in 1923. The site is now in the care of English Heritage.

The guidebook was written by Rose Graham (History) and S.E. Rigold (description). It consists of 12 pages, and the centre pages include a plan of the abbey.  The original price was 4 d. (1962).

Like Loading...
The Solent provides access to the major harbours of Portsmouth and Southampton. Given the naval sensitivities of the area this seaway was heavily defended by a series of fortifications. The western entrance was defended by Hurst Castle built on a spit of land projecting into the Solent. The earliest phase was a Tudor fort contemporary with Deal and Walmer Castles in Kent. The castle was adapted in the Napoleonic Wars, and expanded in the 1850s, 1860s and 1870s. The English Heritage guidebook is by J.G. Coad. Yarmouth Castle is located opposite Hurst Castle on the Isle of Wight. This was also a Tudor foundation. The guidebook is by S.E. Rigold.

Calshot Castle is located at the mouth of Southampton Water. This was also part of the Tudor defences of the Solent. During the First World War, Calshot became a seaplane base to protect against submarines. The guidebook is by J.G. Coad. 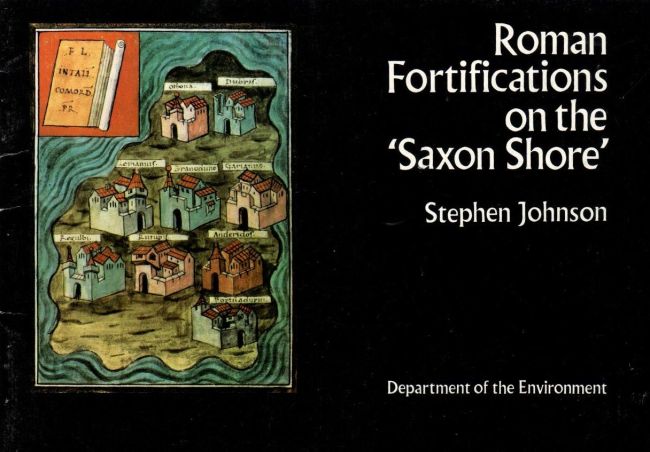 During the 1970s the Department of the Environment produced a number of themed guidebooks to explore a group of sites. Stephen Johnson produced one on the Saxon Shore (1977) to cover the string of Late Roman forts that ran from Brancaster in Norfolk to Portchester in Hampshire. The site of one lies in Suffolk: Walton Castle at Felixstowe (although this has now dropped into the sea). Burgh Castle is now in Norfolk (although it is in the Suffolk volume of Pevsner).

Johnston’s 28 page illustrated booklet, printed in landscape, covers the British forts.  There are also maps showing the parallel forts from Holland and France.