Expresses concern that the 2.9km Stonehenge tunnel options and their associated 2.2km of dual carriageway approach roads within the property that are under consideration, would impact adversely the OUV [Outstanding Universal Value] of the property

The surrounding land was purchased in 1927.

The Visitor Figures for 2015 are now available (ALVA). The top English Heritage attraction is Stonehenge with 1.3 million visitors (no. 21) and showing an increase of 2.0% on 2014.

This is followed by:

Today is the shortest day of the year, so here is a December view of Stonehenge.

The list is demonstrating the importance of the heritage sector to the UK economy.

I have a small selection of guides to Stonehenge and Avebury in my study. My favourite is the HMSO illustrated guide Stonehenge and Avebury and Neighbouring Monuments (1959). The cover is by Alan Sorrell and the text by Professor R.J.C. Atkinson. My copy is a 7th impression with amendments dating to 1970 (cost, 3s 6d [17.5p]). The book was prepared by the Ministry of Public Buildings and Works and the Central Office of Information. (Are there other examples of collaboration?) The main sections are:

There are several Alan Sorrell reconstructions including the building of Silbury Hill and moving the bluestones by raft.

There is a description of Stonehenge including the Avenue, and further sections:

There is also a fold-put map at the back.

There are also three appendices

Again there is a fold-out map at the back.

The latest Stonehenge guide is published by English Heritage and is written by Julian Richards (2013). Cost £4.99.

This has three main sections:

There are also ‘Special features’ including ‘The Druids’ and ‘Stonehenge and the military’.

The plan folds out from the card cover at the back.

The Avebury ‘souvenir guide’ is published by the National Trust with text by Ros Cleal. This is the 2013 reprint of the 2008 edition. Cost: £4. 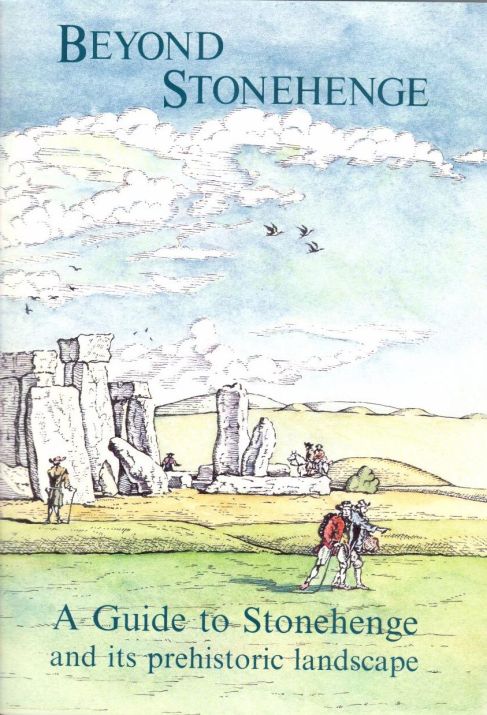 One of the joys of visiting Stonehenge and Avebury has been exploring the immediate vicinity of the stones. Now that the Stonehenge visitor centre has started to encourage visitors to see the structure in a wider setting, it is helpful to think about some of the ways of identifying walks and paths.

Wessex Archaeology produced Beyond Stonehenge subtitled A guide to Stonehenge and its prehistoric landscape (2nd ed. 1991). The sections are:

The National Trust produced a folder, Walking around Avebury (1997). The booklet part has sections on:

Tucked into the pack are three separate leaflets: